The Trinity Triangle’s history is made up of the stories of the people who reclaimed the America Ground, who protested, who lived, worked, and visited this area over the centuries.

Your memories and connection to the area are part of this deep history.

Our Neighbourhood Stories grants help community groups to uncover and celebrate these stories of local people, buildings, and events. Learn how to apply.

Projects we have funded so far include:

Through their project, ‘Suffrage Voices’ Women’s Voice has explored and highlighted the importance of the Trinity Triangle area and its immediate vicinity to the dramatic story of the local women’s suffrage campaign, which reached its height in the years leading up to the First World War.

The Trinity Triangle area housed the headquarters of the local branch of the militant Women’s Social and Political Union (WSPU), which was a hive of activity. Women’s Voice will link with schools, community groups and Hastings residents to map the area and tell the stories of big name personalities and local women suffrage activists who used and came to this area. 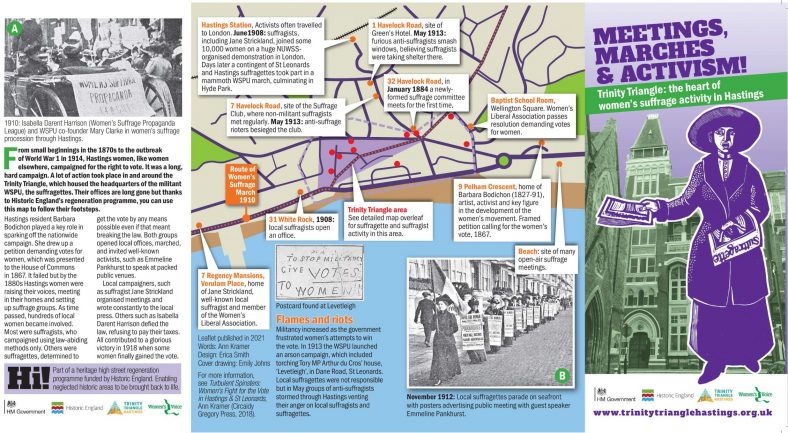 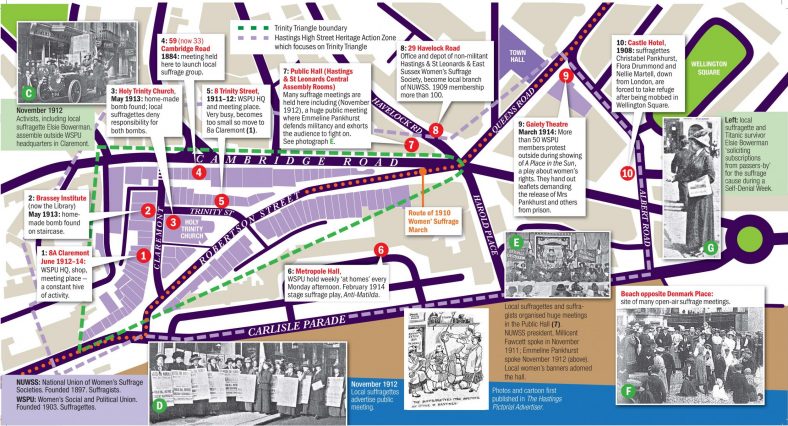 Go back a hundred years and follow the trail of local suffragists and suffragettes who campaigned vigorously for the right to vote. Their voices have gone, and their meeting places have disappeared. However, this newly published illustrated map is bringing their amazing achievements back to life once more. This new map means that anyone whether local inhabitant or visitor to Hastings can now walk around some of the main sites linked to the vibrant and colourful local women’s suffrage campaign.

Producing the map has been a joint venture, funded by Historic England. Local women’s group Women’s Voice has worked with Heart of Hastings to produce this map as part of the Historic England’s funded Hastings Trinity Triangle Heritage Action Zone, the aim of which has been to raise the profile of the fascinating but neglected Trinity Triangle area.

Interestingly, it was a local resident, Barbara Bodichon (nee Leigh Smith), who helped to kickstart the national campaign in around 1867. She, with others drafted a petition presented by John Stuart Mill to the House of Commons in 1867 when he demanded women should be included in the Second Reform Bill then going through Parliament. The demand was rejected but, nothing daunted, women’s demand for the vote began to grow.

As the map shows, by the 1880s the first women’s suffrage organisations were being formed in Hastings. In the years leading up to World War 1, women wrote to the press, drew up petitions, addressed public meetings, held marches and demonstrations, and hired public halls, where prominent speakers, including Emmeline Pankhurst, addressed huge audiences. Most campaigners, such as Jane Strickland, were suffragists, members of the National Union of Women’s Suffrage Societies (NUWSS, committed to law abiding campaigning. From 1903, with the formation of the militant Women’s Social and Political Union (WSPU), some became suffragettes, prepared to use civil disobedience to achieve their goal. Among them were Elsie Bowerman and Isabella Darent Harrison.

The Trinity Triangle area was particularly interesting because it housed the offices of the local WSPU and was the starting point for marches, demonstrations, and seafront placard processions. The suffragists had their offices in Havelock Road, nearby but just outside the Trinity Triangle.

Hundreds of local women were involved in the fight for the vote. Sadly, Women’s Voice has not been able to track down direct descendants locally but would love to hear from any whose grandmothers or great grandmothers were active then. The map itself will be widely available from Hastings Museum, the Library, the Tourist Information Office, and other local outlets.  It is also hoped to organise some guided walks in the near future.

Project Art Works have invited contributions for print in a forthcoming publication. They will also make a selection from submissions to feature in a new window installation at the Untitled Gallery, located in 12 Claremont in the heart of the Trinity Triangle.

The Sea Beneath, an exploration of the history beneath our feet by MSL

The Sea Beneath will map dreams and fears about rising sea levels in Hastings.

The Sea Beneath is an unorthodox research project that will harness the imagination and creativity of the people of Hastings in a new environmental arts and history project,  looking for hidden watercourses under the pavements of Hastings using instinct, science, art, poetry, maps, copper rods, memories, smells, ancient tools – modern science and the ‘old ways’.

The project began with a test event on Sunday 13th December, with participants invited to watch a demonstration, try their hand at dowsing, and to mark their discoveries onto maps.

As the project grows, we will gradually find out just what is happening down there. 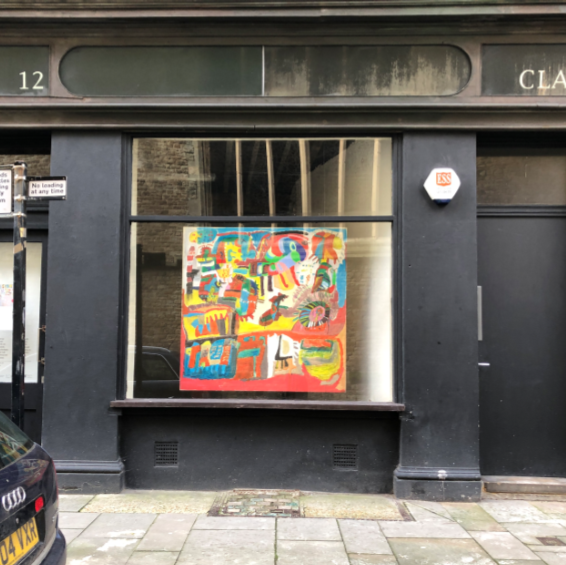 Start the ball rolling by posting a comment on this page!